2002 was the worst year on record with approximately 2,850,000 reported Penal Code offenses; however, the number has decreased of 71% from 2002 through 2019 as a result of enhanced crime prevention measures carried out by the police along with the efforts made by society.

Yet, the crime preventive function of the neighborhoods has deteriorated on the weakened community solidarity and widespread anonymity of urban life.

Under such circumstances, the police are making efforts to promote a “society in which crimes hardly occur” as well as to prevent the occurrence of crimes.

Community police officers maintain vigilance day and night, and they are the first responders to emergency calls from citizens. Through neighborhood patrols and routine home visits, community police officers keep close relations with citizens. They ensure the safety and peace of the community by preventing crimes, apprehending criminal suspects, controlling traffic, offering guidance to juveniles, protecting lost children and the inebriated , and providing counseling to troubled citizens.

Koban and Chuzaisho are at the heart of police activities in Japan. A Koban (police box) is a place where community police officers mainly carry out their work by a relatively small number of police officers (3-5 officers). There are also residential police boxes called Chuzaisho, which are usually staffed by a single officer.
Each Koban and Chuzaisho is situated as a branch of a police station and respectively covers specific areas. They are responsible for maintaining the safety of the respective areas by ascertaining the security situations and hearing the residents’ requests and concerns.

There are approximately 6,300 Koban and 6,300 Chuzaisho in Japan. The existence of Koban and Chuzaisho provides a sense of reassurance to the residents.

The Koban system has attracted a great deal of attention worldwide, and countries such as Singapore and Indonesia have introduced the Japanese-style Koban system. 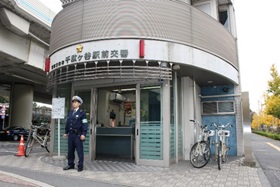 Prevention of Juvenile Delinquency and Sound Development of Youth(356KB)