Organizational Structure and Authority
The Commissioner General, leading the NPA, is appointed by the National Public Safety Commission with the approval of the Prime Minister. The Commissioner General, under the supervision of the Commission, oversees the agency's operations, appoints agency employees, and manages prefectural police organizations. The NPA, as a national agency, formulates police systems and also conducts police operations regarding cases involving national public safety, undertakes administration of matters which form the foundation of police activities such as police education and training, police communications, and criminal identification as well as coordination of police administration. 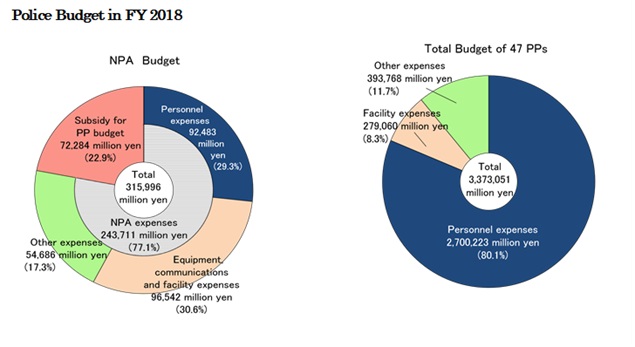 Each prefectural government pays all expenses to operate its PP, excluding the direct appropriation from the national treasury. However, with the exception of some personnel expenses for Superintendents and lower ranking officers including installation costs, the PP budget can be supplemented by subsidies from the national government.

A. Direct Appropriation from the National Treasury
The following are the major expenses directly appropriated by the national government for use by the PP:
B. Appropriation by Prefectural Government
Prefectural governments appropriate funds for the following use by the PP except for the expenses listed in A:
Equipment
A. Police Vehicles
Police vehicles, as the core of the mobile police force, take on the task of responding to daily occurrences of crimes and accidents. They are also used for street patrols and other police activities.
Approximately 42,500 police vehicles are equipped at police stations, police boxes (Koban), and residential police boxes (Chuzaisho) throughout the country.

B. Police Boats
As the mobile police force on the water, police boats are employed at major ports, remote islands, lakes, and marshes to patrol and fight against illegal immigration, smuggling, and poaching. Ranging from 5 to 23 meters in length, there are approximately 150 police boats nationwide.

C. Police Helicopters
As the mobile police force in the air, police helicopters are used extensively for traffic control surveillance, pursuit of suspects, rescue, and disaster relief. A total of approximately 80 small and medium-sized helicopters are operated nationwide.